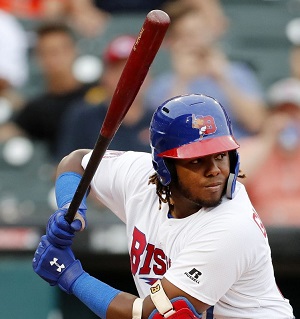 Vladimir Guerrero, Jr.—if he’s anything like his old man, they’re going to love him in the Show. What are the Blue Jays waiting for?

Along comes Vladimir Guerrero, Jr. His father earned the nickname Vlad the Impaler during a career that earned him induction into the Hall of Fame last year. The son may be baseball’s number one major league ready prospect even at nineteen years old. The Blue Jays don’t quite see it that way.

Customarily a player who posts a .978 OPS at Triple A has shown he’s major league ready. The bad news is Jays general manager Ross Atkins, believing Guerrero, Jr. isn’t major league ready because he’s . . . only nineteen years old. And Atkins stumbled so clumsily over himself trying to explain that he became an immediate textbook exercise in why players aren’t the only ones who think front offices are talking through their chapeaus about player development versus player control:

It really comes down to development. I just don’t see him as a major league player. You just pencil him in and he’s done. He’s 19. He has accomplished everything he can accomplish as an offensive player. And there’s so many opportunities for him defensively and what he can do to really maximize the power, the size and the strength that he has.

Talking out of both sides of his mouth? Atkins talks through a five-pointed star of an orifice. Never mind that Guerrero fils will be 20 before Opening Day. It makes you wonder where he was or wasn’t, or what he has or hasn’t read, about other nineteen-year-olds brought to the Show and making impacts:

Juan Soto, 2018—He might have been last year’s National League Rookie of the Year if not for a fellow named Ronald Acuna, Jr. Soto posted a .923 OPS and whacked 22 home runs, which was even more impressive considering he didn’t come up to the Nationals to stay until mid-to-late May . . . after earning three minor league promotions up from A-level in a month to start his season.

Bryce Harper, 2012—He was only the National League’s Rookie of the Year, an All-Star, and worth 5.2 wins above a replacement-level player, and his 57 extra base hits that season set a modern-era record for teen players. And now he’s still on the open free agency market with an excellent chance of equaling Manny Machado’s new contract for himself.

Ken Griffey, Jr., 1989—He didn’t do quite as well as Harper or Ott in his age-19 season; the Hall of Fame greatness began the following season. But he finished third in the American League’s Rookie of the Year voting and showed various tastes of what was to come at the plate and in center field alike.

Dwight Gooden, 1984—The National League’s Rookie of the Year that season, Gooden busted Herb Score’s record for strikeouts in a rookie season, and Dr. K’s mark (276) remains the modern era rookie record. He went from there to post the impossible season in 1985 . . . and in spring training 1986 the Mets, somewhat insanely, ruined him.

They told a young man who’d struck out 544 batters in his first two seasons, and had a 1.91 fielding-independent pitching rate to line up with his 2.07 ERA those two seasons (and a Cy Young Award the second) that he needed . . . more stuff. As if his multiple-warhead fastball and the most voluptuous curve ball since Sandy Koufax wasn’t enough.

“I always thought they should have left Doc alone,” said Hall of Fame catcher Gary Carter. “[Pitching coach Mel Stottlemyre] thought teaching him a third pitch would be to his advantage. But he didn’t need it. He needed someone to say, ‘Hey, you’ve been successful. Just keep going at it.’ But they didn’t.” It shot Gooden’s confidence and his release point. And something else. Carter: “I also think it hurt his shoulder. The pitches didn’t feel natural to Doc, and pitching was so natural to him. It just wasn’t smart.”

Confidence shot, especially because the pliant Gooden listened to everyone no matter how cockamamie their suggestions. Near-constant shoulder issues and substance abuse to follow. Gooden had a long and very respectable career after all, including a late-career no-hitter, but he was really denied his chance at sustained greatness by short-sighted coaching and management.

Wally Bunker, 1964—Blessed with a deadly sinkerball, Bunker was the American League’s Rookie of the Year runner-up with a 2.69 ERA and a major league-leading .792 winning percentage. The bad news: Bunker experienced arm soreness during a start on a cold Cleveland night. The soreness turned out to be undiagnosed tears in a tendon or a ligament.

Bunker would never be the same pitcher again, though he’d pitch a six-hit shutout in Game Three of the 1966 World Series en route the Orioles’ sweep of the Dodgers. He ended up an original Kansas City Royal and threw the first pitch of their existence, but the arm issues persisted and he was finished by 1970.

Tony Conigliaro, 1964—Tony C. set the modern-era record for home runs by a major league rookie when he bopped 24. The following season, he’d become the American League’s youngest home run champion ever with 32. Three years later, his career would be derailed when, unable to duck out of the way in time, a Jack Hamilton fastball smashed into his face, causing serious eye issues that eventually ended his career in earnest.

Mel Ott, 1928—Ott actually came to the Giants right out of the chute at 17, but manager John McGraw—terrified that some nitwit minor league coach or skipper would try to wreck the kid’s unorthodox but impeccable swing (his front leg kick as he began his swing made him resemble a pitcher about to deliver)—kept him next to him two years to teach him the game before letting him fly as the Giants’ regular right fielder.

Master Melvin merely posted a .921 OPS in 124 games in 1928. And he merely went on to become the National League’s home run king of the pre-World War II era (he was the second behind Babe Ruth to hit 500+ career home runs) and a Hall of Famer.

Those may be the best nineteen-year-old seasons on record. But there’ve been other nineteen-year-olds who came to the majors to stay at that age, under various circumstances. They include but may not be limited to Chief Bender, Ty Cobb, Bob Feller, Felix Hernandez, Al Kaline, Sandy Koufax, Manny Machado, Mickey Mantle, Bill Mazeroski, Milt Pappas, Alex Rodriguez, Babe Ruth, Mike Trout, and Smokey Joe Wood.

All but three of those are Hall of Famers, by the way. Rodriguez would be if not for, you know, that other stuff. And those who think Trout won’t be should know that he’s already above the career WAR of the average peak-value Hall of Famer, and he ranks objectively as the seventh-best all-around center fielder of all time. More’s the pity that baseball’s governors still can’t find a way to promote him as the face of the game.

“Atkins and the Jays’ organization think that they are fooling people by saying it comes down to development,” writes Sportsnaut‘s Vincent Frank. “There’s nothing more that [Guerrero, Jr.] can develop by dominating lesser competition in the minors. It’s that simple.”

Maybe even simpler. The Blue Jays need all the help they can get if they hope to compete in an American League East that’s not necessarily known for showing mercy to the lesser forces.

“Teams are going to be highly resistant to any change that deprives them of cost controlled years of their best players,” writes FanGraphs‘s Craig Edwards. “But the [Major League Baseball Players Association] focusing some of their attention on getting players like Vlad Jr. to the majors, as well as getting better benefits to the minor leaguers left behind, can only be to the game’s benefit. Many of baseball’s stars of tomorrow are ready today. Let’s watch them play, shall we?”

If he’s anything like his father, whether or not he’ll swing at anything within his area code the way Pop did, Guerrero fils is going to make Blue Jays and other fans fall as much in love with him as Expos, Angels, and other fans did with the old man. Let’s, indeed.