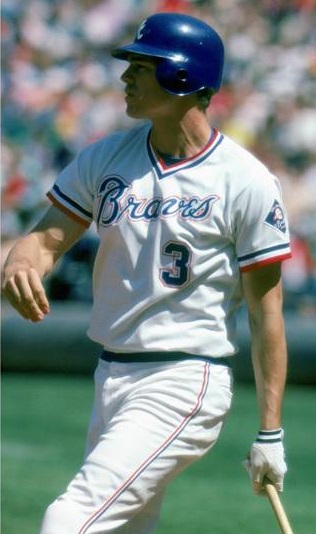 [I]f I can count on one hand the number of teams that genuinely tried to improve this winter, it’s an indictment of the offseason — and the game in general. Unless something changes, this problem won’t go away. It will only get worse.—Dale Murphy

There are always those players incumbent and retired about whom you can say that when they talk, the game ought to listen. Dale Murphy is one of those among the retired. And if he says baseball has a problem with free agency based on the past two off-seasons, baseball ought to listen.

As he writes in The Athletic, the Manny Machado deal should be something of a wake-up call for owners and players alike. Whether it will be is something else entirely.

Murphy begins pretty much by re-iterating an argument he’s made previously, that reinventing free agency would give the owners—whom he doesn’t believe are colluding now the way they were foolish enough to try twice in the 1980s—less time to sign free agent players. “After all, if nothing is going to happen for months on end,” he writes, “the game might as well regulate that as part of its offseason calendar.”

Sound as a nut. You probably didn’t need Murphy to tell you as he does that nothing happening when anything could happen can knock you down, but nothing happening because you have to wait for it to happen “builds suspense. The possibility and speculation would drive fans into a frenzy.”

Face it. Until Machado and the Padres tied the knot this week, nothing happened while anything could have happened when it came to some of the game’s marquee free agents. About the most exciting things to happen were the trading table moves the Reds and the Mets made. And suddenly both teams didn’t look like basket cases anymore.

The Reds went from nothing special to hey-look-us-over in one big deal with the Dodgers looking to re-arrange their payroll, not to mention a couple of moderate-level free agency signings, and Cincinnati actually believes the Reds could do something they haven’t done in a few years, make some legitimate racket in the National League Central.

The Mets went from six dozen in-house disasters to half a dozen potential improvements with a couple of clever trades and a couple of bargain signings, and so long as they can stay the hell off the disabled list—oops! the injured list—they’re liable to make some legitimate National League East racket this year.

Then the Padres and Machado tied the knot. And suddenly the rebuilding Padres looked as though contention might not be as far away as anyone thinks. And didn’t you become exhausted from the Machado/Bryce Harper cacophony well before Machado decided San Diego looked just right for him? Even Murphy might have.

But suppose nobody could touch any free agent until, say, January at all, or after the Super Bowl, the latter of which is Murphy’s own suggestion? (Presumably, Murphy has in mind a signing period no longer than January or the end of the Super Bowl to maybe the second week of spring training.)

“You don’t think that type of months-long chatter would be good for the game?” he asks, then answers. “Look at the NBA. Nothing — no trades, no free-agent signings — can happen until July, and all anyone is talking about in February is where Kevin Durant and Anthony Davis will end up. That’s telling.”

Murphy’s only too well aware that the days of the ten-year contract are gone, unless it involves someone as young as Machado, who’s not even 26 just yet. But does that mean the top drawer free agents of any offseason should remain unemployed as long as Harper, Craig Kimbrel, Dallas Keuchel, and Marwin Gonzalez (if you don’t think he’s top drawer, name me one better jack-of-all-trades on the market right now) have?

The owners aren’t wrong to shy from elongated contracts with players 31 or older; the Albert Pujols deal showed the pitfall of such a player starting the deal reasonably right but falling into an injury pit the way Pujols did. His legs and heels have reduced him to a designated hitter and a not-always-available one. That won’t hurt his Hall of Fame case, of course; the man was a Cooperstown lock before he signed with the Angels. But if the owners, as Murphy writes, are drawing a line in the sand about long term deals, the players might want to think of a line of their own.

It’ll take more than players not named Harper thinking about ten years and the equivalent of a tropical island economy. It’s not unrealistic for Harper to think that way considering he’s Machado’s age give or take a month or three. But if the owners really want to put the near-permanent brakes on decade-long deals, Murphy says, the players should put one pistol to their heads and compel them to make arbitration eligibility and free agency happen sooner than they do now.

The current rules let players go to arbitration after three seasons and to free agency after six. Murphy suggests changing it, respectively, to two and four. He may have something there. And it wouldn’t stop a club from gazing upon its newest and likeliest-to-last superstar and offering to extend him more than handsomely, or a player from deciding its worth pushing back his first free agency if the club wants him badly enough to make him that rich that soon. (You wouldn’t be shocked if the Red Sox offer and Mookie Betts accepts, would you?)

When the Messersmith ruling came down in 1975, even then-Players Association director Marvin Miller didn’t want to make players free agents right out of the chute after single seasons once the first free agency class was established after 1976. Nor did Miller want to deny the teams’ rights in players they developed for at least their first few seasons. Six seasons to a player’s first free agency seemed about right for a long time.

But that was then, this is now, and as Murphy says the owners can’t have it both ways. “They can’t control a player on the cheap for most of his 20s and then refuse to pay him once he hits 30,” the former longtime face of the long-enough-time woebegone Braves writes. “I expect this to be a point of contention during the next collective bargaining agreement. And if it’s not, it should be.”

I understand the appeal of young players, but I worry about guys who have been in the league for 6-10 years getting squeezed. These guys aren’t hanging on for one more year in the sun. They’re seasoned veterans who would bring leadership and production to any organization. Younger players are cheaper and more controllable, I get it. But that doesn’t necessarily mean they’re more valuable — or even a better value — than guys who have been around the block and understand what it takes to win, who understand what it means to be a professional.

Though Murphy didn’t attach a name to that, you just got a serious discourse in why the Nationals were as willing as they were to hand now-retired Jayson Werth seven years at $126 million entering the 2011 season. The game went nuts, even from those quarters who respected Werth as a man. The Nats knew better.

Werth was a good player who sometimes touched greatness as a ballplayer, when he wasn’t injured, but he was invaluable in policing a clubhouse and teaching younger men how to be professional without turning into the old gray flannel suits. He was good at doing what several Nat managers couldn’t. And he was good at calling out weaker but recalcitrant managers, too. (“When exactly do you think you lost this clubhouse?” he challenged Matt Williams, long after everyone but Williams knew he’d lost just that.)

They got to four postseasons in Werth’s seven years with them. Last year’s Nats seemed to sputter under their own weight much of the season, looking for clubhouse leadership that suddenly lacked or didn’t show up consistently. Former manager Dusty Baker drove the point home: “Jayson Werth. That’s who they miss in that clubhouse.” They’d better hope that talk of newly solidified clubhouse leadership is equal to their playing potential this season.

“I’m not suggesting that owners spend money willy-nilly and give players whatever they want,” Murphy emphasises. “That’s not how business works, and there has to be some give and take on both sides.

“But if I can count on one hand the number of teams that genuinely tried to improve this winter,” he continues, “it’s an indictment of the offseason — and the game in general. Unless something changes, this problem won’t go away. It will only get worse.”

You get that Harper might not have to re-align his thinking toward a shorter-term deal especially with the Padres showing his agesake Machado the money and the years of commitment, never mind the opt-out clause Machado can exercise after five years. What you may not get is Kimbrel standing fast on big bucks and long years.

He’s been as lockdown as closers get. Or, he was, until last season, anyway. Look past his 2.74 ERA, his 13.9 strikeouts per nine, and his 0.99 walks/hits per inning pitched rate on the regular season. His fielding-independent pitching (that’s your ERA when nothing’s considered but your strikeouts and your walks, folks) was 3.13, which would be terrific for anyone else—but was the worst of Kimbrel’s career. Before last season his lifetime FIP was 1.80.

He’s lost some hop on his fastball; his rates allowing home runs and extra-base hits at all were career worst; his ground ball percentage was likewise far below his career rate to that point; he started working out of the zone more as he went to his breaking balls more. For any other relief pitcher Kimbrel’s 2018 might look like a career year. For Kimbrel, it looked like the beginning of his decline phase.

And that’s before he turned a few postseason gigs too many into overtime for on-call mobile cardiac arrest units. (If nothing else, he owes Andrew Benintendi big for that diving catch that bailed him out of a potential bases-clearing, game-winning double by Alex Bregman in the ALCS.)

That’s not to say that a team looking for an established closer would ordinarily shy away from a Kimbrel. But it is to say that they’re not going to pay him for what was simply because what was is already far enough in the rear view mirror. Kimbrel can still be good enough for a contending team, but there’s probably no way—barring unforeseen miracles—he’s going to be even slightly above average for all of the six years and nine figures he’s said to want.

Still, speaking in general terms, Murphy isn’t even close to off base. He knows that you can justify some but not all teams being quiet in this year’s free agency market. He didn’t have to come right out and say it’s one thing for an established contender to stand predominantly pat (and several didn’t), but something else entirely for a woebegone team that isn’t as poor as you think not to think about improving the on-field product even a little bit.

“Whatever the next big signing is, whenever it comes, I’ll be happy,” he writes. “But I’ll wonder why it didn’t come sooner. And I won’t hold my breath for the next.” He may not be alone there.