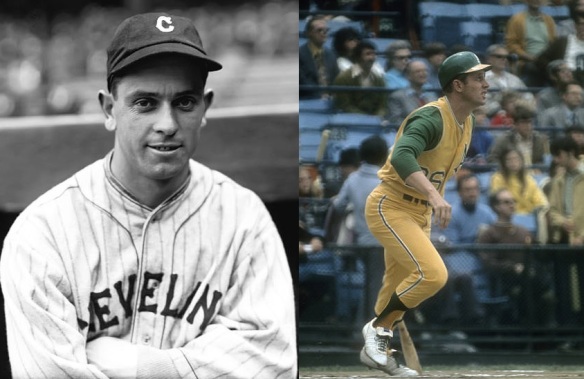 Judge Landis was ignored when he suggested Earl Averill (left) should get a piece of his sale price; Bowie Kuhn voided the sale of Joe Rudi (right) and two teammates. Baseball might have been a little different if Landis was heeded and Kuhn wasn’t ignorant.

One commissioner’s ignored suggestion and a future commissioner’s foolish ruling, both involving player sales, might have made major differences if each went the other way. Especially on the pressures brought into the game in the years after the reserve era ended with the Andy Messersmith-Dave McNally ruling of 1975.

In 1928, Earl Averill of the Pacific Coast League’s San Francisco Seals caught the eye of the Indians. The Indians bought Averill from the Seals for a reported $50,000, with the apparent proviso that Averill wouldn’t have to report to the Tribe until after the PCL pennant race was over. A quiet man whose passions included animals and flowers, the future Hall of Famer was also savvy enough to flinch when he read about the sale in a newspaper article.

As Bill James exhumed for The New Bill James Historical Baseball Abstract in 2001, Averill asked how much of the sale price he could expect to receive. James didn’t say whether the Seals laughed their fool heads off, but he did say the answer was nothing. If that was the case, Averill decided he wasn’t going anywhere, never mind that both the Seals and the Indians tried to talk him into deciding otherwise.

That debate reached the eyes and ears of Kenesaw Mountain Landis, baseball’s autocratic first commissioner. Landis may have been foolish administering justice more rough than just over baseball’s former gambling scandals. He was utterly stupid in his de facto upholding of baseball’s colour line. (He never formally or officially rejected black players in the major leagues, but no team dared to sign one so long as he ran the Show.) But Landis was absolutely visionary when it came to his reaction to the Averill sale.

The commissioner actually agreed with Averill. He actually thought Averill’s demand for a piece of the sale price was reasonable. As James phrased it, Landis suggested “that baseball should adopt some sort of legislation by which, whenever a player was sold, the player himself would get a cut of the proceeds.” James merely said the idea went nowhere; one can imagine too readily the owners of the time asking what was in Landis’s tea in that moment because they wanted to get loaded, too.

But Landis’s suggestion also never crossed the mind of future commissioner Bowie Kuhn, in 1976, when Kuhn allowed his distaste, shall we say, for Athletics owner Charlie Finley, to get in the way of sound judgment and, concurrently, put an unnecessary virus into baseball’s financial body.

Like his fellow owners of the time Finley quaked over the Messersmith ruling. Unlike many of his fellow owners, Finley operated the A’s by the proverbial seat of his pants, even if he shared with them a passion for operating as cheaply as he could get away with doing. But he also saw a way to balance his own financial scale in Messersmith’s immediate wake.

Over sixty players would face their first free agency after Messersmith won the end of reserve clause abuse. Finley traded two of them before the 1976 season began, outfielder and future Hall of Famer Reggie Jackson and pitcher Ken Holtzman, to the Orioles, for outfielder Don Baylor and pitcher Mike Torrez. Three more of Finley’s free agents-to-be—outfielder Joe Rudi, pitchers Vida Blue and future Hall of Famer Rollie Fingers—refused to sign 1976 contracts, and Finley renewed the three under the maximum allowable twenty percent pay cut each.

Rudi, Blue, and Fingers refused to sign deals lacking their biggest known demand: the no-trade/no-cut clause whose rejection by the Dodgers instigated Messersmith into pitching without a 1975 contract in the first place. And the Oakland trio knew the manipulative Finley only too well. As Rudi was eventually quoted as having told the incoming Baylor, “Any time you hear him clearing his throat, he’s lying.”

Finally, Finley shifted gears from trade talk to sale talk. In addition to Rudi-Blue-Fingers, Finley brought third baseman Sal Bando to the sales floor, the price $500,000. The Red Sox struck first. They wanted Rudi and Fingers, even though they also needed a lefthanded starting pitcher like Blue more than they needed an outfielder or relief pitcher. The Yankees swung into the store next, ready to bring Blue right to the checkout line.

That jolted the Red Sox. Knowing Kuhn wasn’t George Steinbrenner’s biggest fan, either, they feared Kuhn would void their purchases if the Yankees were seen just in the store’s neighbourhood. They even lured the Tigers, who’d shown prior interest in Blue, back to the sales floor. (Get that sonofabitch away from the Yankees, one published account quoted Red Sox general manager Dick O’Connell as telling Tigers GM Jim Campbell.) And the Tigers were ready to pay the same million for Blue that the Yankees were ready to spend.

One day later, the Yankees raised by $500,000. And as the rest of baseball realised Finley wasn’t kidding about his intended fire sale, the Rangers jumped in offering $1 million for Baylor, while Bill Veeck—who’d re-purchased the White Sox—asked about buying Bando. All this and more reached Kuhn about Finley’s Supermarket as he sat in Comiskey Park watching the White Sox host the Orioles.

Kuhn was anything but amused, and Finley, likewise unamused, told Kuhn it was none of his bloody business; since when did commissioners poke their noses into player transactions? Finley was probably as unaware of Landis’s earlier thoughts regarding Averill as he was too well aware of a previous A’s owner, Connie Mack, breaking up powerhouse teams twice with fire sales because he was cash strapped.

But according to John Helyar in Lords of the Realm: The Real History of Baseball, Dodgers owner Walter O’Malley (whose team’s fractured negotiation with Messersmith led to the end of the reserve clause abuse in the first place) told Kuhn that if Finley could consummate the sales, the end of the reserve era now meant pennant races could be decided in June. You could buy the pennant at the checkout counter! Don’t let it happen, Bowie! This is baseball, not the A&P!

That was from the owner who bought longtime Giants mound menace Sal Maglie from the Indians in May 1956, thus helping to make the final Brooklyn Dodgers pennant possible, while Kuhn was a young lawyer working for the New York firm Willkie, Farr & Gallagher—whose clients included the National League.

Kuhn voided the Rudi-Blue-Fingers sales. He couldn’t “persuade himself” that buying the three Oakland stars was “anything but devastating to baseball’s reputation for integrity and to public confidence in the game, even though I can well understand that their motive is a good faith effort to strengthen their clubs.” Any player who dealt with any front office duplicities in reserve-era contract negotiations, as well as any of the very few genuinely honourable owners*, had to have laughed his fool head off right then and there.

It got even better. Lenny Bruce schpritzing at Carnegie Hall couldn’t have topped Kuhn from that point:

If such transactions now and in the future were permitted, the door would be opened wide to the buying success of the more affluent clubs, public suspicion would be aroused, traditional and sound methods of player development and acquisition would be undermined, and our efforts to preserve the competitive balance would be gravely impaired.

God rest his soul in peace, but the only thing gravely impaired in that moment was Kuhn’s thinking. That, James wrote, “was an ignorant, bone-headed, destructive policy which had no foundation in anything except that Kuhn hated Charlie Finley and saw that he could drive Finley out of the game by denying him the right to sell his [star] players.”

What Kuhn should have done, if he had been thinking about the best interests of the game, is adopt the Landis policy: rule that players could be sold for whatever they would bring, but 30% of the money had to go to the players. Had he done that, the effect would have been to allow the rich teams to acquire more of the best players, as they do now. But this policy would have allowed the rich teams to strengthen themselves without inflating the salary structure, and would have allowed the weaker teams, the Montreal-type teams, to remain financially competitive by profiting from developing young players.

If you think Rudi, Fingers, or Blue would have objected to pocketing $300,000 each as their cut of those sale prices, I have a cheap old ballpark to sell you—on Coogan’s Bluff. Finley might have squawked over getting only $2.1 million for only as long as it took him to put it in the bank.

If Kuhn was smart enough to apply the Landis suggestion, there might have been instances of a sold player pocketing more as his cut of his sale price than he earned in salary the same year. Joe Rudi earned $84,000 in 1975 and, after that twenty percent pay cut, $67,200 in 1976, but thirty percent of his intended sale price would have put almost as much money in his pocket at once as he asked for over three years before the sale proposal.**

Who’s to say those owners not as financially endowed (or daring) as Steinbrenner wouldn’t have been able otherwise to lure some of the choice free agents Steinbrenner could lure, or offer competitive signing bonuses to prime draft picks, if they could have continued player sales? Who knows how much less the salary structure might have inflated in due course, if Kuhn hadn’t voided the Rudi-Fingers-Blue sales while imposing a concurrent cap of $400,000 on straight cash deals, meaning teams in need couldn’t sell their stars for big money while keeping their bargains on the sales floor for comparative pocket change?

We’ll never know for sure, but we do know how things turned out for Averill. His impasse was resolved when the Indians paid him both a $5,000 bonus and a salary somewhat higher than the normal major league rookie salary of the time, and he went to Cleveland to begin the Hall of Fame career compromised when a back injury in a 1937 game wrecked his formidable swing.

Averill was elected to the Hall of Fame in 1975. He looked only slightly less foolish criticising the Hall for his not being elected sooner, as he did in his inauguration speech, than Kuhn looked placing a chance to stick it to Finley over the good of the game.

* Phillies owner Bob Carpenter was one such owner, if you take the word of his Hall of Fame pitcher Jim Bunning. When Carpenter tried to talk Bunning—the Phillies’ player representative and one of the players union’s committee who recruited Marvin Miller as their executive director—out of hiring Miller in the first place, Bunning gave Carpenter a testimonial right to his face.

* With free agency on his horizon, Joe Rudi wanted $375,000 over three years to stay in Oakland. Sidebar: He was the one player among the big three in Finley’s intended fire sale who actually reported to his new club, even being fitted for a Red Sox uniform, right before Bowie Kuhn voided the three sales.

When Rudi hit free agency after the 1976 season, he signed a five-year, $2.09 million deal with the Angels. After an injury-plagued four seasons in Anaheim, the Angels traded Rudi and pitcher Frank Tanana to . . . the Red Sox, in the deal making an Angel of outfielder Fred Lynn.

Rudi finished the deal with another injury-riddled season in Boston and became a free agent, signing with . . . the A’s, now owned by Walter Haas. He played 1982 with the A’s, who released him in late October. Career over. But not before ending it with a bang; Rudi hit a two-run homer off Kansas City’s Larry Gura in his final major league at-bat.